This post has been updated to recognize the work by Confluence, designer of The Green at 320.

The Green at 320, the public plaza below the just-completed office tower 320 South Canal, opened quietly last week, ahead of its official opening Friday the 24th. The dreaded day job will keep me away from the big ceremony, so I headed down to the West Loop (Gate) Sunday to check out the park. It was worth the trip.

The “main” entrance to the park is a stairway on the corner of Clinton and Van Buren Streets. There are accessible ramps at both ends of the park: one off Clinton Street next to the Union Station Transit Center, and one of Van Buren Street. There is also a street-level entrance on Canal Street.

Here’s a press release from Biederman Redevelopment Ventures regarding the park and the programming plans to come:

CHICAGO, (April  27, 2020) – – Dan Biederman, one of the country’s leading  urban redevelopment experts and public space management consultants has partnered with Riverside Investment & Development Company and Convexity Properties to design free programming for The Park @ 320 at the entryway of 320 South Canal Street in downtown Chicago. The building serves as the new US headquarters for BMO Financial Group.

Biederman and his firm Biederman Redevelopment Ventures  ( www.brvcorp.com ), will provide a detailed programming plan for the public park, including a tentative schedule for programs, amenities, events, budgets, and a procurement list related to supplies and equipment.

BRV will also participate in the recruitment, interviewing, and selection of the Program Coordinator for the public space and will be responsible for training the successful candidate as  the programs start-up and continue working with that person throughout the spring, summer, and fall.

320 South Canal, also known as the BMO Tower, is a new 50-story commercial office building adjacent to Union Station in Chicago.  The building will feature a selection of restaurants, world class amenities and a spectacular 1.5-acre urban park with year-round programming, which will be one of the largest privately owned public parks in the City of Chicago. The website: https://320southcanal.com/

“Riverside and Convexity are seeking to provide their tenants and their employees and visitors and citizens of Chicago with an actively programmed public space,” said Dan Biederman. “With their building manager CBRE, they deserve a lot of credit. And we are proud to be part of this team.”

BRV specializes in creating programming, self-sustaining budgets and building management teams for urban parks and public spaces in 32 states and six countries. BRV has worked with some of the most successful public spaces in the country, including Klyde Warren Park and Fair Park in Dallas, Titletown District in Green Bay, WI., Levy Park in Houston and Salesforce Park in San Francisco, Hudson Yards, and Baltimore’s Inner Harbor district.

In addition to overseeing BRV Corp. and serving as the Executive Director of the Bryant Park Corporation, Biederman is also the president of the 34th Street Partnership, an ambitious business improvement district. He was also a co-founder of The Grand Central Partnership, which helped renovate the neighborhood of a NYC landmark from a deteriorating, dreaded and sometimes dangerous transportation hub to today’s mecca for tourism, food, and a safe destination for commuters.

About Riverside Investment and Development

Riverside Investment and Development Company is a multi-faceted real estate firm based in Chicago, Illinois. Founded in 2010 by John O’Donnell, a longtime Chicago real estate veteran with more than 30 years and 40 million square feet of investment, development, and redevelopment experience, Riverside is focused pursuing of complex development and redevelopment opportunities. We aggressively manage risk via detailed front-end evaluation and planning, selective locational focus, and a willingness to form strategic relationships where appropriate for a particular transaction. Our relationships have been carefully cultivated over years of experience with local and national consultants, brokers, and other stakeholders. For additional information, visit www.RiversideID.com

Biederman Redevelopment Ventures Corporation is the private consulting firm of Daniel Biederman, co-founder of the Bryant Park Corporation and 34th Street Partnership. BRV Corp. is a nationally recognized leader in the creation and revitalization of parks, public spaces, streetscapes, and business improvement districts. BRV designs free programming and events, creates self-sustaining budgets, and builds management teams for urban parks and public spaces in 32 states and six countries. BRV works with real estate developers, government agencies, and non-profits to reinvent public spaces and has worked with some of the most successful urban parks and spaces in the country, including Bryant Park in New York, Klyde Warren Park and Fair Park in Dallas, Titletown District in Green Bay, WI., Levy Park in Houston and Salesforce Park in San Francisco. More detailed information is at www.brvcorp.com

Enjoy the photos, then get down to 320 South Canal and enjoy the public space!

It doesn’t seem that long ago, when the parking lot across State Street from Holy Name Cathedral was being torn up, and foundation digging began.

Now, One Chicago is almost to that point where, if you want to see what’s happening with construction, you have to go inside.

Once again, this is your One Chicago team: JDL Development, with a hand from Wanxiang America, is the developer. Hartshorne Plunkard Architecture and Goettsch Partners shared design duties. And Power Construction is the general contractor.

There are only a couple floors of curtain wall left to install on the east tower, but we still have one tower crane to savor here, so let’s make the best of the rest of our time together. (Cue dramatic music)

Parting is always such sweet sorrow, but tower cranes don’t stay in one place forever, so shed no tears for the Potain MR298 Luffing Jib workhorse atop 320 South Canal in the West Loop. Last week, a derrick crane was installed to dismantle and lower the tower crane, and that it did, with removal, from what I could see 52 stories below, wrapping up Monday.

I made it over here in time to see a couple crane sections on the ground, and one loaded up onto a truck to be hauled away. I tried to wait for the truck to pull out of the construction site, for the dramatic grand exit, but I lack patience. I also tried waiting around long enough to see the derrick crane lift a load of steel up to the top. I didn’t last that long. This was interesting though. I’m going to make some assumptions here, but that load of steel looked heavy, and that derrick crane doesn’t have much reach away from the glass cladding on the west face of the tower. There were guy-wires on each end of the load, running on tracks running up the side of the tower, to keep the steel from rotating, which would have sent one end or the other crashing through the façade. Or at least scratching the heck out of the glass. Who knows, maybe these are common, but they’re something I’d never noticed before. The photo in the gallery below with the two red circles shows those attachments.

15 minutes elapsed between the time I took this first photo of the steel lift and the second photo, and it’s only about 3/4 of the way up. Glad that crew has more patience than I.

Enjoying the photos? Metra and CTA rides, Zipcars, Divvy Bikes, camera lenses, and comfortable walking shoes are adding up. You can help offset expenses by making a greatly-appreciated donation to Building Up Chicago.

That’s right, I hashtagged #firescraper. I want that to become a thing.

This post was started back in February 2020. We really want this one to get started. How many buildings can be referred to as mixed-use because they’ll contain office space, retail space, parking, and a freakin’ firehouse!?

The Rivere will be 30 stories with 30,000 square feet of ground-level retail space and a firehouse. Developed by Friedman Properties. Designed by Goettsch Partners. Firehouse designed by DLR Group.

When the firehouse is demolished, as with all demolitions, water will be sprayed on the crumbling structure to limit dust. Who’s better at spraying water than the Chicago Fire Department? A match made in heaven, I tell ya.

A couple more photos of the firehouse for you, plus renderings of The Rivere from Goettsch Partners:

Where there were three, there now is just one.

One Chicago once blessed the city with three tower cranes, but progress means we have to say goodbye to them one-by-one, and Tower Crane C has done all it can do to top out the west tower. So down it comes.

Congrats on the milestone to everyone involved: General Contractor Power Construction; Developer JDL Development; and Design Architects Goettsch Partners and Hartshorne Plunkard Architecture. Not to mention those of you who’ll someday live in one of these shiny new beauties.

And now, more photos than you knew you needed of a tower crane being dismantled:

Goettsch Partners announced on their Instagram page last night that the final beam has been lifted into place at 320 South Canal, celebrating the topping-out of the West Loop’s freshest skyscraper.

Congratulations to all involved on this construction milestone, including Clark Construction, Riverside Investment & Development, and Goettsch Partners.

Check out the Instagram photos from Goettsch at the link above, and then I’ve got a few more construction pics for ya.

One Chicago is coming.

The residential (condos and apartments,) office, and retail block from JDL Development is making its mark on Chicago’s skyline.

The 49-story western tower topped out back in January, while the 76-story condo tower should be really darn close to following suit, if it hasn’t already.

Here’s your One Chicago team: JDL Development, with a hand from Wanxiang America, is the developer. Hartshorne Plunkard Architecture and Goettsch Partners have shared design duties. And Power Construction is the general contractor.

Want to see a whole bunch o’ photos from Monday? I knew you would.

From the west, Union Station Tower is starting to obscure 311 South Wacker.

If you stand near the base of the under-construction Union Station Tower, it feels like it. and you, are surrounded on all sides by view-blocking height. But wander out of The Loop a few blocks, and you’ll begin to see just how dominant this tower is becoming in its own right.

By the way, you can have your choice of names for this tower aw well. Union Station Tower, BMO Tower, and 320 South Canal all work. 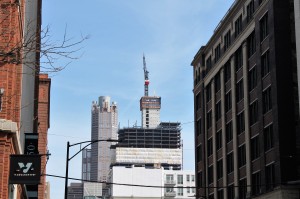 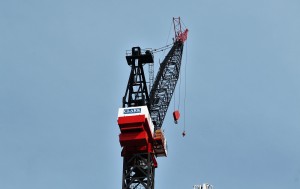 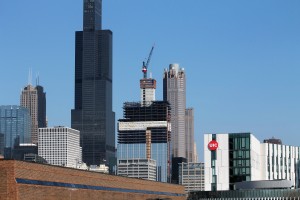 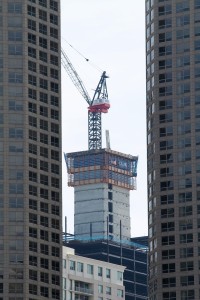 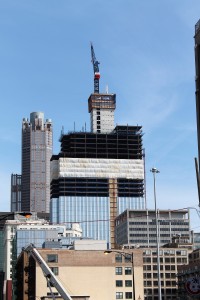 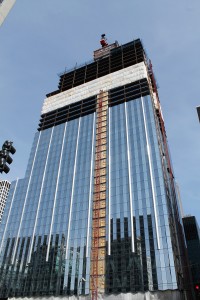 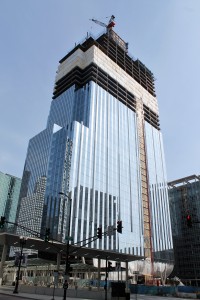 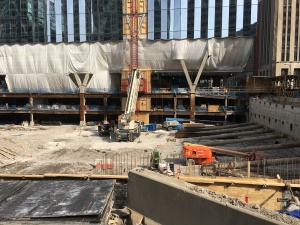 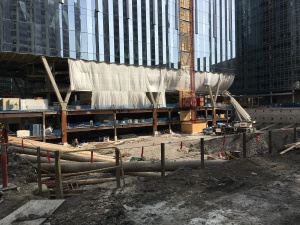 All photos taken back on August 17. The way it’s going up, One Chicago might be finished by now. 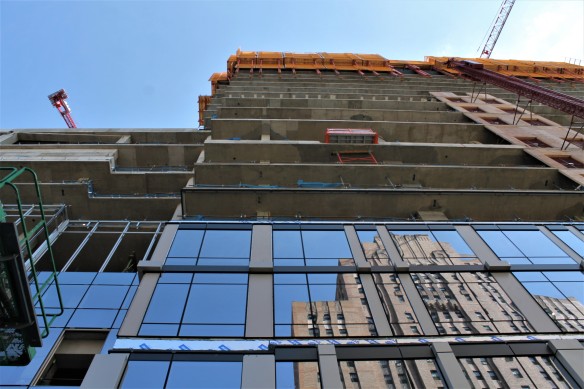 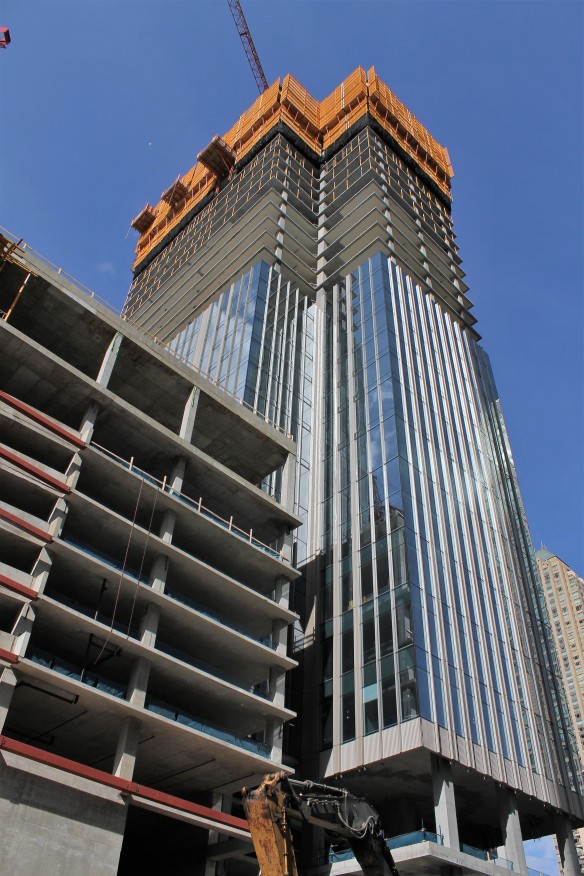 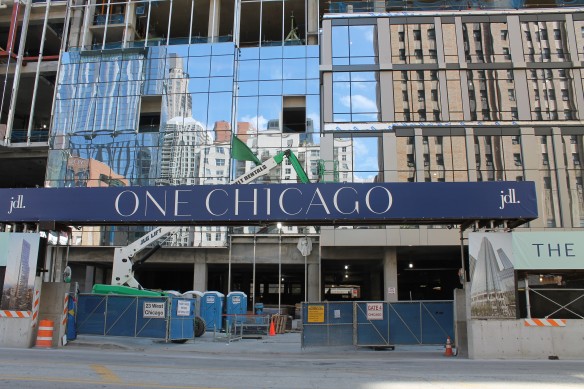 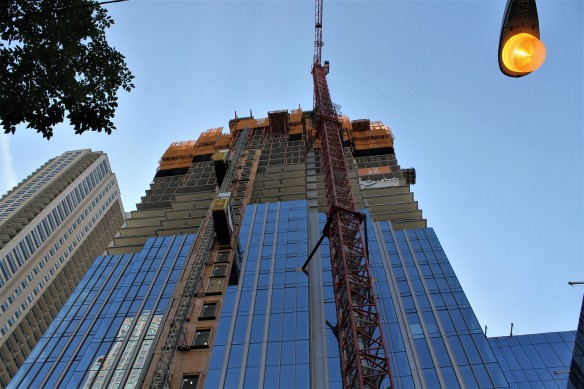 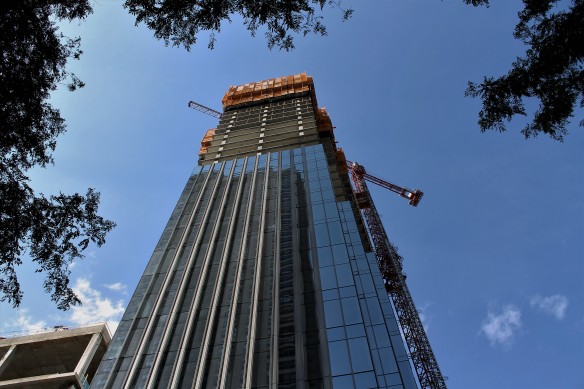 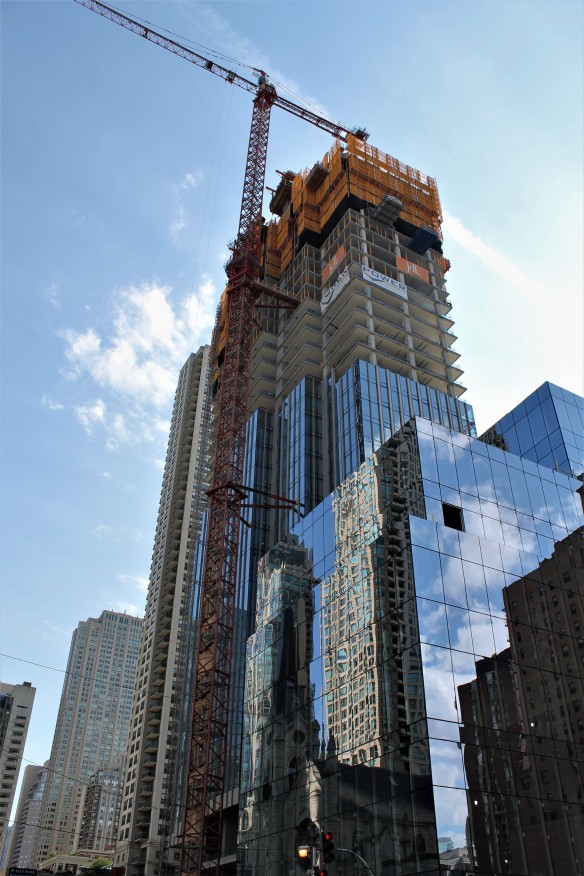 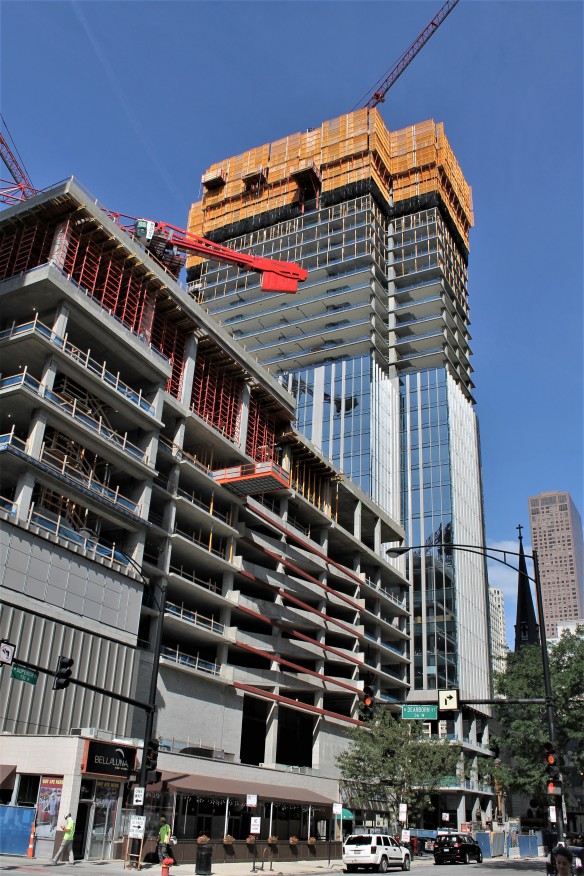 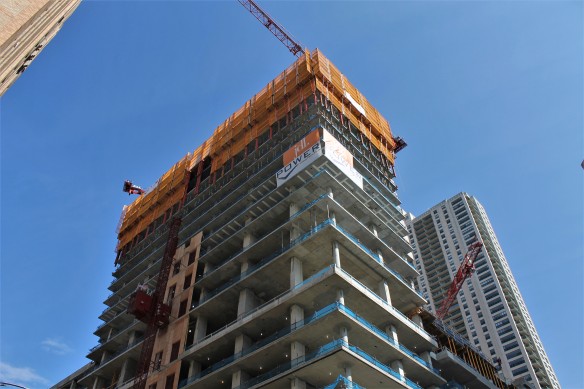 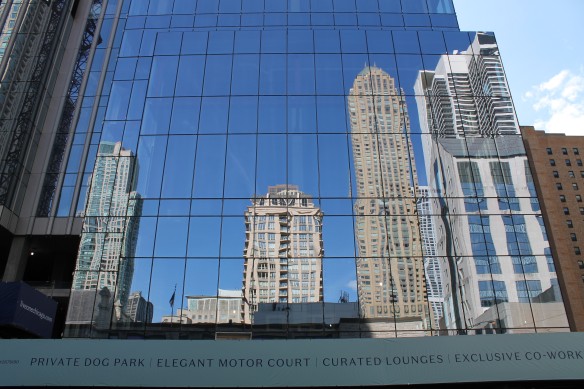 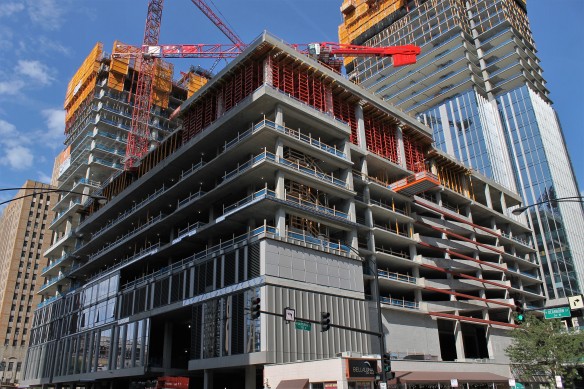 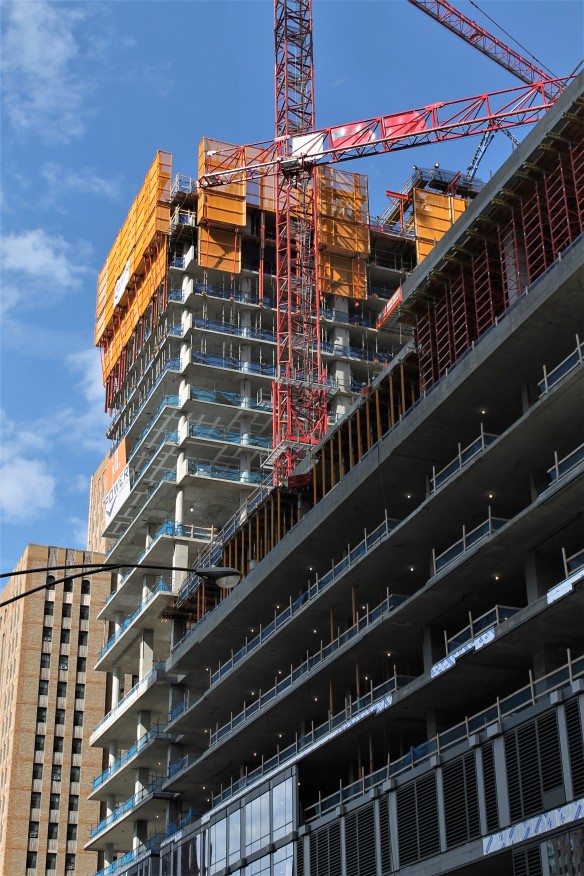 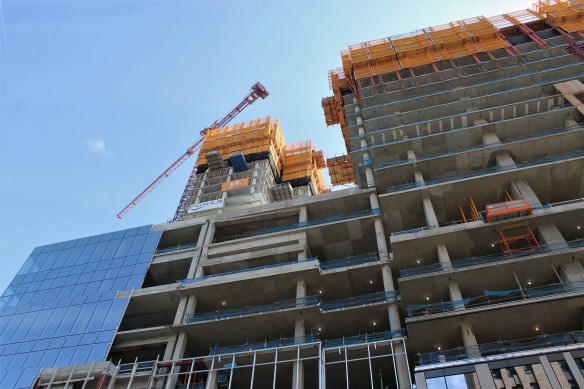 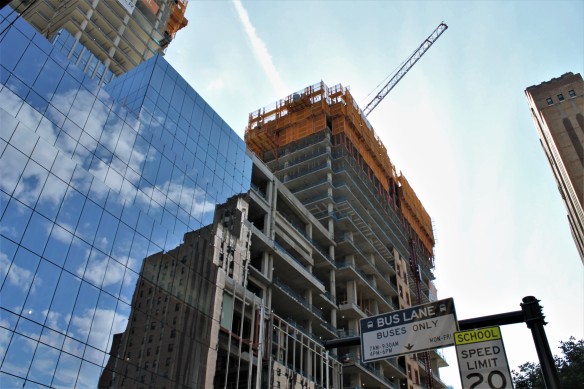 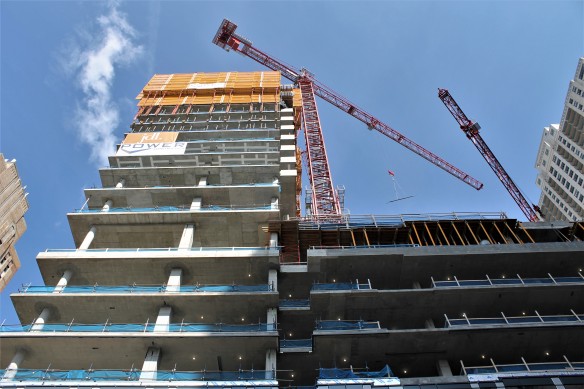 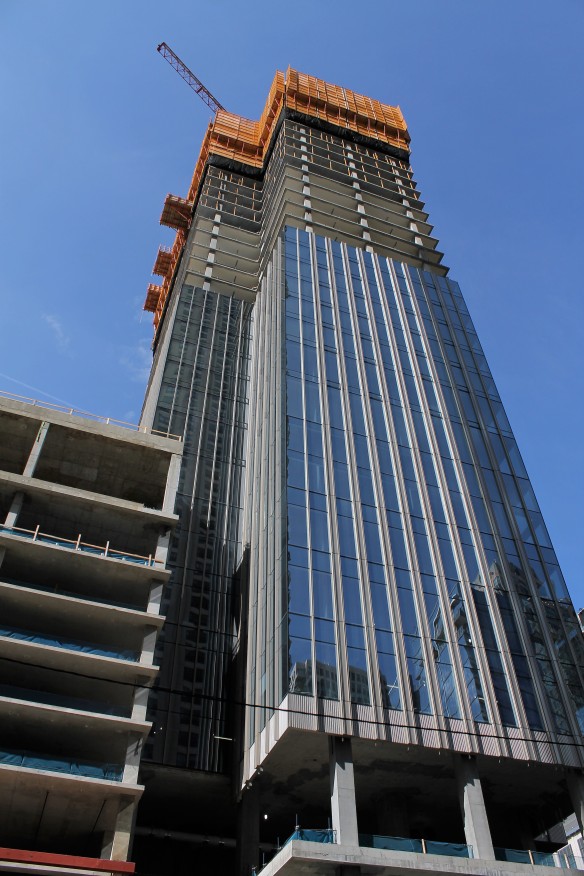 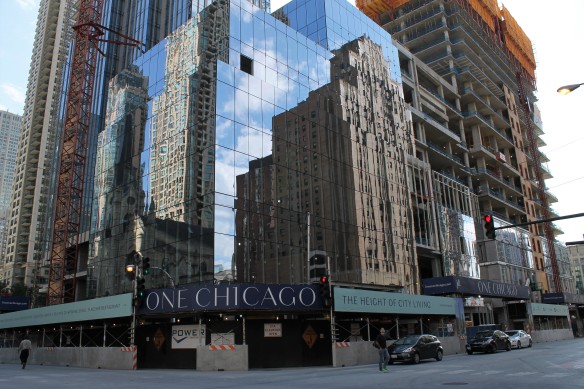