Named for its proximity to Brisbane’s luxurious City Botanic Gardens, Abian is a 41-story condominium tower that just opened this summer. Built by Sunland Group, it is a design from Wood Marsh Architecture of Port Melbourne, Victoria. 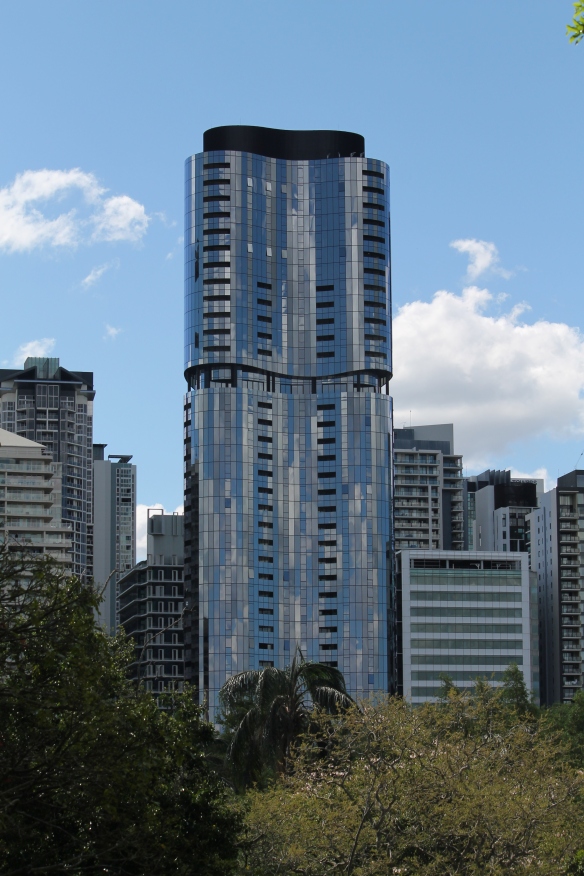 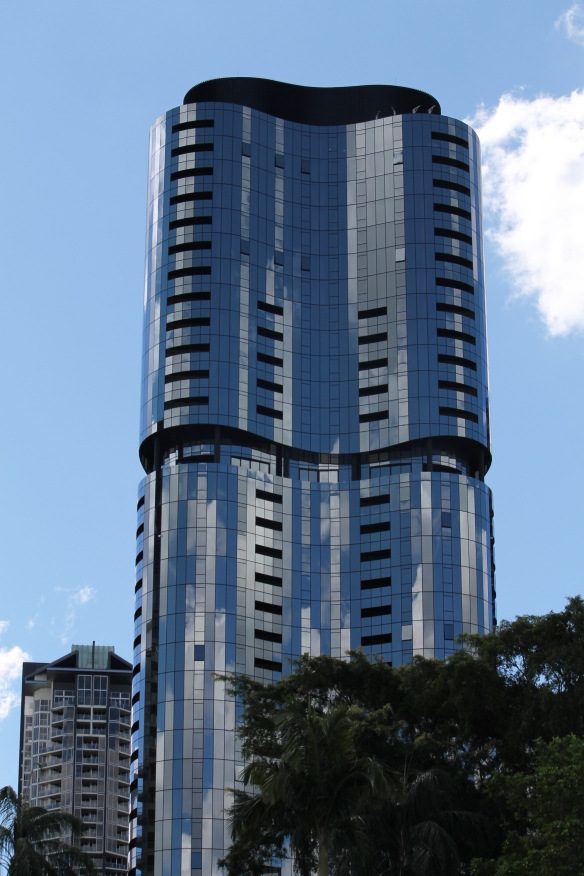 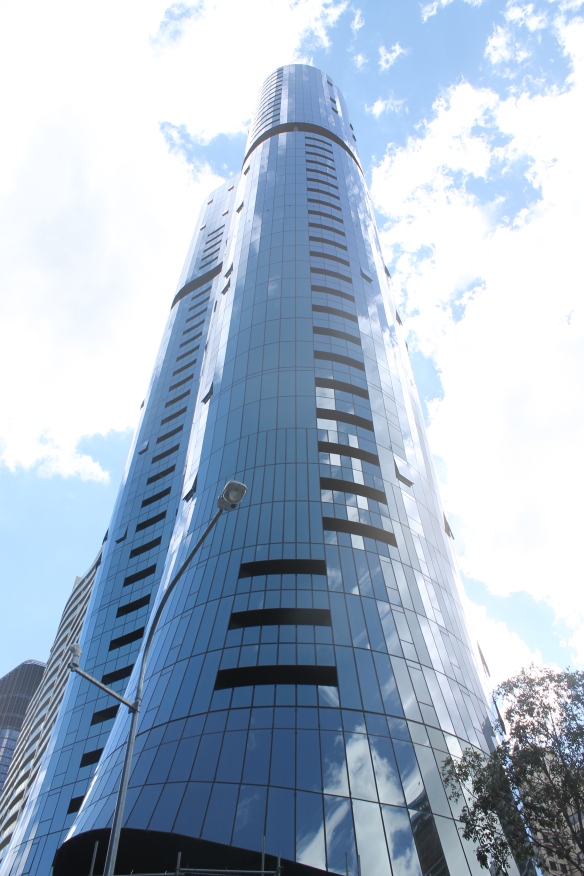 Honorable Mention goes to Soleil Apartments – Meriton Suites at 485 Adelaide Street. We stayed in a Meriton room our one night in Brisbane, but didn’t realize just how tall this monster was until we went out and about town, then started walking back. It’s got the height I love, plus great curvy colors on the facades.

Designed by DBI Designs (I’ll always love them for Jewel Residences) for Meriton,  Soleil was completed in 2012. It weighs in at 76 stories, with residences on the upper floors, and the hotel suites down low. It is officially the tallest building I’ve ever spent a night in. (I’m sure they’ll be adding a plaque in the lobby.) 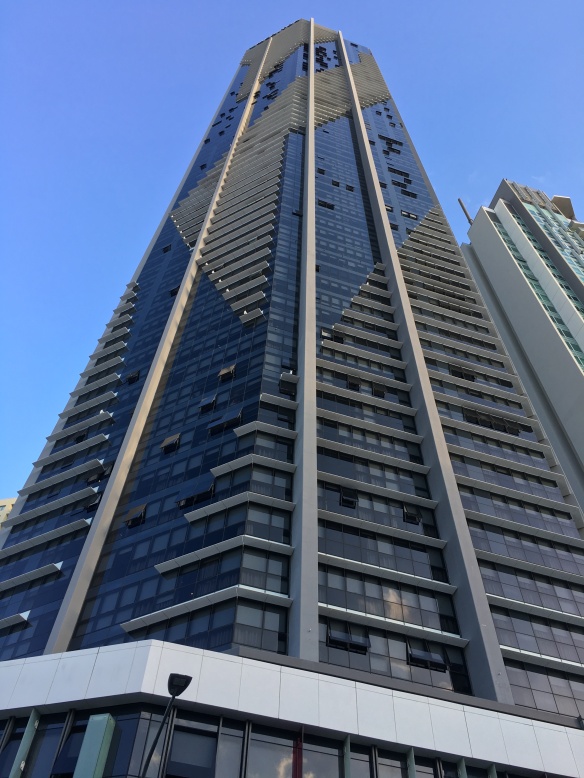 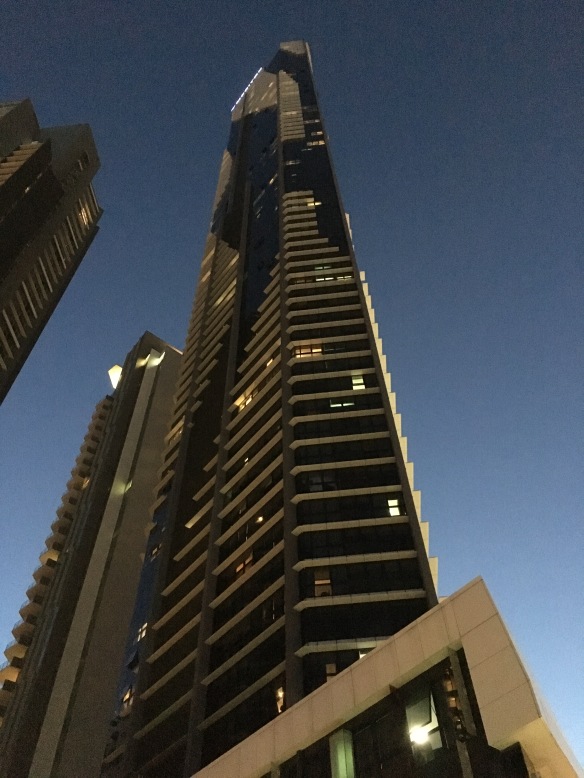 Meriton is a brand I didn’t know until our Australia trip. We saw a few properties in Sydney, spent a night in one Meriton serviced apartment and gawked at their 2nd Brisbane skyscraper, then noticed yet another from our rooftop deck in Gold Coast. Finally, a casual stroll through Surfers Paradise revealed what remains of an almost-completed 22-story demolition (of the former International Beach Resort) that may just turn out to be the most impressive Meriton tower yet. 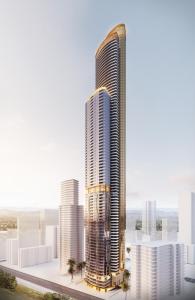 This rendering appeared in the Gold Coast Bulletin.

Over the past 12 months, since Meriton bought the property at 84 Esplanade, multiple outlets including the Gold Coast Bulletin, Brisbane Development, the Australian Financial Review, Ray White Surfers Paradise, and Meriton itself (that’s a lot of sources) are reporting that Meriton will build a tower of at least 90 stories in height. That could make it the tallest in Gold Coast, the tallest in Queensland, and even the tallest in all of Australia, depending on how high it goes.

Meriton Suites Surfers Paradise would contain 311 suites on floors 3-30, with the upper floors being for-purchase units. That link says it would be open in 2018; with demolition still underway, that seems optimistic, but we’ll see.

The consensus seems to be that SJB designed the would-be supertall.

For now though, it’s still this modest-looking demo job.