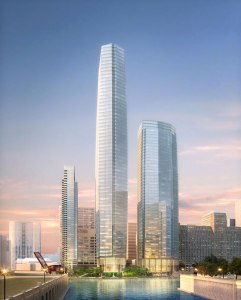 Skyscraper nerds had already left the fork in the Chicago River for sites like Vista Tower and One Bennett Park, what with Wolf Point West, River Point, and 150 North Riverside all completed and open. But now, time will once again be split, and attention divided, as the next phase begins.

Hines is developing the 60-story, 700-unit apartment tower here, along with land-owners the Kennedy family. A collaboration between architect-of-record Pappageorge Haymes Architects and designer Pelli Clarke Pelli Architects, Wolf Point East is the second of the three towers slated for this corner of the river. There will be about 3,500 square feet of retail space as well, plus a whole bunch of parking spots. But don’t worry about eyesores; that parking will be located underground.

Case Foundation is there as we speak, drilling caissons into the ground. Walsh Construction is the general contractor. When their tower crane goes up (soon, please?) it’ll be Walsh’s second in Chicago, having just erected one at 1326 South Michigan, and removing one at Alta Roosevelt over the weekend.

This view will be changing very soon.

A group portrait from across the Chicago River.

Wouldn’t you park it at home if you had a machine this grand?