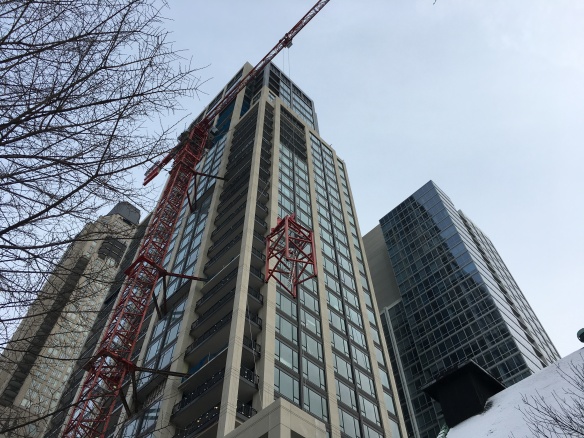 The tower crane at No. 9 Walton is slowly lowering itself to the ground, one segment at a time.

If you thought No. 9 Walton at 9 West Walton Street in the Gold Coast neighborhood topped out months ago, and that it seemed strange how long that hammerhead tower crane remained aloft, you were on to something. While we can’t confirm anything, we’ve got our suspicions that the $58.5 million sale for the top four floors may have had something to do with the longevity of the crane. (Dennis Rodkin over at Crain’s Chicago had the scoop back in January.)

The stub was planted at No. 9 Walton in March of 2016, after getting its permit on the first of February. By my calculations, that’s about two years ago. That’s a long time for a tower crane to be on a job site, especially one that’s “only” 38 stories high.

No. 9 Walton is a project from JDL Develoment. You may recall hearing that JDL’s president and founder, James Letchinger, had set aside a unit in this tower for himself. That’s a pretty good indication he’s paid very close attention to every facet of its construction.

The design was by Hartshorne Plunkard Architecture. Lendlease handled the GC duties.

This was a handsome tower crane. 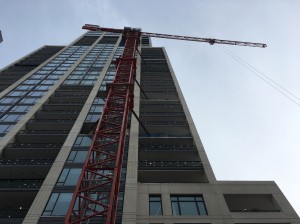 There’s the stub in March 2016, while excavation work continued. 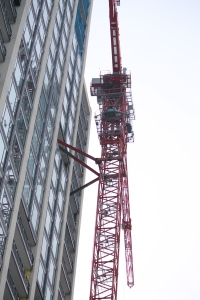