A tower crane stub has been planted at Renelle on the River.

One of the city’s tightest construction spaces has planted a shiny yellow tower crane stub. Renelle on the River is the 18-story, bKL Architecture-designed condo tower Belgravia Group is sliding atop the underground parking garage at 403 North Wabash in River North. And a walk-by yesterday reveals McHugh Construction working around the new crane.

Rendering of Renelle on the River from bKL Architecture.

Renelle on the River is a curious project. Not only is it the aforementioned tight squeeze where a small plaza once stood, but it will also be angled in such a way as to give all residents a view of the Chicago River. And then there’s the foundation. No caissons were drilled for this one (the building permit went straight to full-build, with no foundation permit), leaving one to assume the existing parking structure was built to support much more weight than a few cars. And that tower crane’s foundation? It appears to be suspended in mid-air, even while being rooted in a huge block of concrete. It’s a mesmerizing set-up, to be sure.

Renelle on the River will bring 50 three- and four-bedroom condominiums to the neighborhood. There’s a sales office right next to the site, if you want to stop in and check them out. We highly suggest taking their virtual tour. 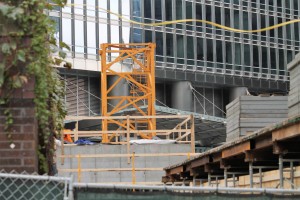