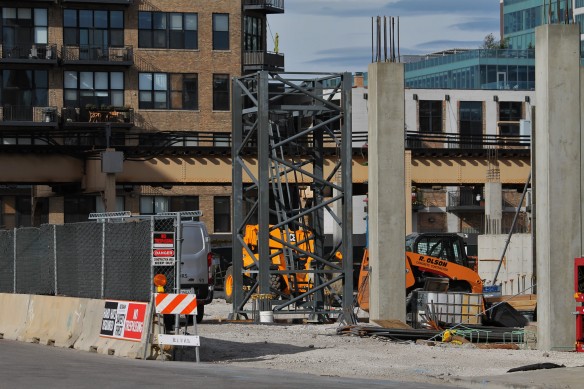 Apparently I am a man who can get things done. My squeaky wheels attract much grease. Something along those lines.

It was only Monday that I lamented a second tower crane permit for 171 Aberdeen, the mixed-use project in the West Loop from MCZ Development, yet still there was no tower crane to be seen. Then Tuesday, for no better reason but to appease my insatiable curiosity, I wandered by the site again, despite having been there just two days earlier. And lo and behold, what to my wondering eyes should appear, but a brand-spankin’-new stub sticking up out of the ground.

I also found the reason for the delay. That permit I told you about Monday for “RELOCATION OF CAISSONS AND GRADE BEAMS” was necessitated by a bit of miscommunication, and the new caissons were required directly underneath the new tower crane, as the original caissons were insufficient for supporting the weight of the crane. That means there are four additional caissons planted under what is now a slightly smaller crane pad than was initially planned.

A quick reminder about 171 Aberdeen before I let you enjoy a few pics of that glorious crane stub: it will have 75 luxury apartments, 15,000 square feet of retail, and 40,000 square feet of office space, and about 130 parking spots.

Cement will be poured into the foundation Wednesday.

See? I TOLD you that looked like a good spot for a tower crane!