This permit supersedes the first permit, both of which are superseded by NOT HAVING A TOWER CRANE YET

It’s been since May 10 that we’ve been waiting for a tower crane at 171 Aberdeen in the West Loop. That was the day the City of Chicago filed a permit, allowing the general contractor on the MCZ Development project, Novak Construction, to start building the foundation for a Peiner SK415 temporary tower crane (that’s industry talk.)

Now, there’s a second tower crane permit. I have no idea why. Do tower crane permits expire? Whatever the case may be, they’re still getting things done at Lake and Aberdeen, though progress does appear to have slowed. It’s just that all the work is being done by a yellow street crane, and those simply aren’t as cool to look at. Nor probably as efficient. 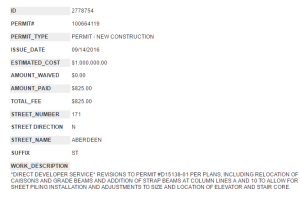 Filed September 14, this permit called for “caisson relocation” among other changes.

Curiously, there was another permit issued for 171 Aberdeen back on September 14 that may denote a change on the fly in the program. This being well after caisson work had been finished, that permit called for “RELOCATION OF CAISSONS AND GRADE BEAMS.” Now, I don’t know much about how construction works, but I *do* know that it sounds like a major hassle to relocate a caisson. It makes me wonder if some were added, and it might be the logical explanation for why Revcon equipment was seen on-site within the past few weeks.

Looks suspiciously like a tower crane foundation, doesn’t it?

This hole right here looks pretty much the same…