Taking a loooong look at the Nobu Hotel, from Peoria Street over the Eisenhower Expressway.

In May, Centaur Construction got back to work at Nobu Hotel, and it didn’t take them long to hit their stride again.

With Pepper Construction’s help on concrete, progress on the hotel has jumped up to the fourth floor since we last stopped by just a couple weeks ago, while the core continues to grow toward its 11-story goal.

In the meantime, the Chicago version of the Nobu Hotel has changed ownership, with new permits listing NHC, LLC of Coral Gables, Florida as the new entity. The address comes up as the AIC Hotel Group, which lists other Nobu Hotels, and Hard Rock Hotels, among its properties. 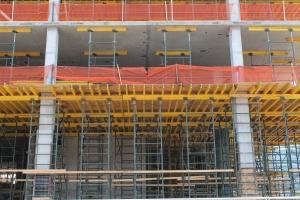