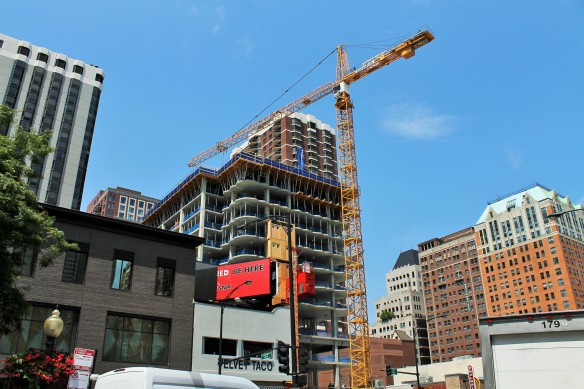 The Viceroy Chicago rises in the Gold Coast.

Up in the Gold Coast, construction continues on Convexity Properties’ new (though slightly used) Viceroy Chicago hotel. New, as in a new 18-story, 180-room hotel. And used, as in the facade that was painstakingly dismantled from the old Cedar Hotel at 1118 North State Street. That facade is off at a facade spa getting treated like a princess, while Power Construction attends to the new tower. Then the facade will be brought back to the site and reconstructed piece by piece as part of the new building. That, along with the rooftop bar and pool, should be highlights when the Viceroy opens in Summer 2017.

You can download the Viceroy Chicago press release from March 2015 here, or see the full text below the photos:

The Cedar Hotel. This facade was dismantled, and will be rebuilt on the front of the new Viceroy Chicago.

A rendering of the Viceroy Chicago from the Power Construction website.

Working in tandem with Convexity Properties, the powerhouse luxury hospitality brand will unveil the Goettsch Partners and TAL Studio-designed property, located conveniently for guests on State Street in the Gold Coast. The area occupies the central part of a flourishing neighborhood, quickly gaining momentum as one of the most sought-after modern luxury destinations in the city.

Known for creating authentic and inspired experiences, Viceroy Hotel Group will be using design, art, style and culture to infuse the new property with all the amenities and services of a top-luxury hotel, while simultaneously working to maintain a distinct sense of place for guests eager to explore and experience the Chicago landscape.

“Viceroy recognizes Chicago is a vibrant market and a great destination for our expansion,” said Bill Walshe, CEO of Viceroy Hotel Group. “We are extremely privileged to collaborate with Convexity Properties team to create exceptional and inspiring experiences for our guests in such a highly sought-after location.”

Convexity Properties is collaborating closely with the City, neighbors and community groups to finalize approvals for what will be an extraordinary project for the city.