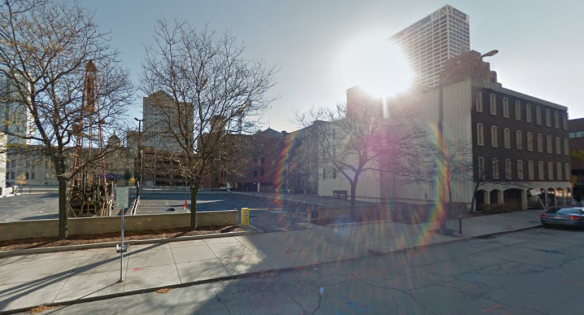 My apologies for the horrible Google Maps photo, but this is the block, before demolition, where construction is taking place, and THERE’S EVEN A SOIL SAMPLING RIG!

This is Part II of my follow-up visit to Milwaukee, and my attempt to sort out what I initially incorrectly wrote about in regards to the Northwestern Mutual development there. You’ve seen the ridiculous number of photos of the Northwestern Mutual Tower and Commons. Now you can take a look at the nowhere-near-as-far-along project at 777 North Van Buren Street.

A rendering of 777 North Van Buren Street from Northwestern Mutual.

That’s where Northwestern Mutual is building a 34-story mixed-use building to accompany the office tower immediately to its southeast. The Solomon Cordwell Buenz-designed tower will contain retail space on the first floor, along with parking that will extend through the first eight floors. (There will be a whopping total of 1,400 parking spaces, including some underground parking for residents, to be used for the retail shops as well as the office workers at the Tower and Commons.) Atop that will be 25 residential floors containing 308 “high-end” apartments and 14 penthouse units. The 34th floor will be amenity space.

C.D. Smith is the general contractor on the project, with completion expected in Spring 2018.

Another apology for another Google Maps photo. Those four buildings were demolished to make room for 777 North Van Buren.

A few peeks down into the abyss. See the road on the left side?

Of course, that’s Northwestern Mutual Tower and Commons tower in the background.

Big rigs on the construction site.

An embarrassingly bad Google Map of the construction block.