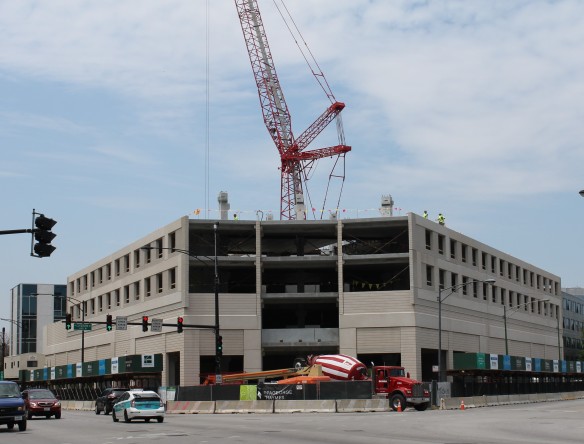 Clybourn 1200 is being pieced together by a massive ground crane, like an out-of-hand game of Tetris.

Clybourn 1200 is a new mixed-use, mixed-income apartment project from Brinshore Development. Depending on your perspective, it’s in the Gold Coast neighborhood, the Goose Island area, the Cabrini-Green neighborhood, or the Near North.

The V-shaped building, designed by Pappageorge Haymes Partners to fit in the triangular lot at 1200 North Clybourn Avenue, will have 77 apartments for people, a whole bunch of roof-top hives for bees, and 17,000 square feet of space for retailers, including a day-care center for children.

McShane Construction is on the build, a notable site for its massive red crane parked in the middle of the lot.

It picked it up, now it’s setting it down.

Come on, admit it. That’s an amazing piece of machinery. 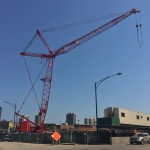 Getting kinda personal, shooting it from the back like this, but you can see the counterweight required for heavy lifting cross a large site like this one.