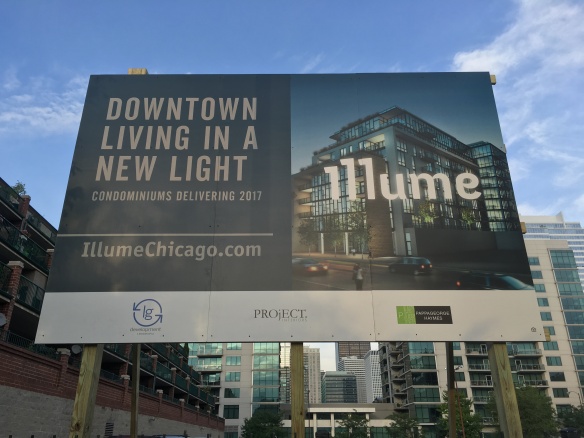 Illume (11ume?) Chicago, now with its own signage.

Would still be controversial?

Try as they might (you can read all about the contentious road this project took here at chicagoarchitecture.com) to quash the project at 111 South Peoria, West Loop NIMBYs (mostly from the two adjacent condo buildings, then just one at the Plan Commission meeting) failed to prevent the brand new condominium development from happening in the current parking lot at the same address.

And now that the contentious plan has met the approval of 27th Ward Alderman Walter Burnett, Jr. and the Chicago Plan Commission, 111 South Peoria has a new name as it moves towards fruition: Illume. But fancy, with three 1s instead of an i and two Ls. But a small 1 and two big 1s. 111ume? Yeah, it’s hard to type it that way.

Illume Chicago was approved by the Chicago Plan Commission back in March. It gave the okay for 79 condos in a 115-foot-tall building. Designed by architecture firm Pappageorge Haymes Partners, Illume is expected to be ready for occupancy in 2017. Along with being the developer, LG will be the general contractor as well.

The rendering of Illume Chicago presented by LG Development at the March Plan Commission meeting.

This parking lot will soon be Illume Chicago. 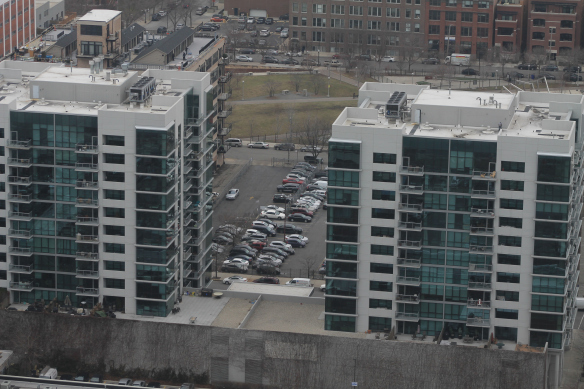 The very same parking lot, as seen from the Up Chicago office.