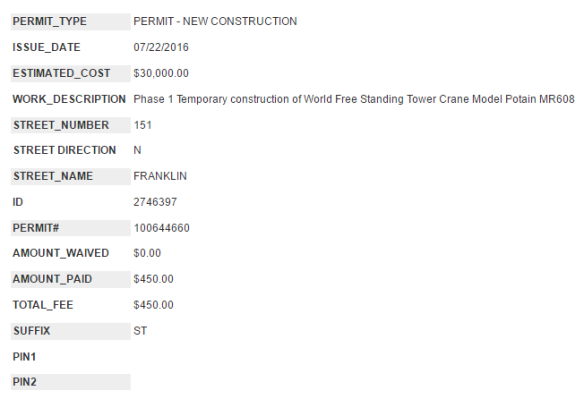 The permit for the kinda-sorta tower crane at the CNA Center, 151 North Franklin Street.

On Thursday, I passed along the heartbreaking news that the new CNA Center, the 35-story office tower being built at 151 North Franklin Street in The Loop, wouldn’t have a regular tower crane, but instead would utilize a crane attached to the structure itself. Well, that apparatus still requires a permit from the City of Chicago, and it was filed on Friday.

Interesting factoid: The standard tower crane permit shows an estimated cost of $60,000. This pseudo-tower crane permit goes for just $30,000. So they’re saving half from the get-go. Let’s just hope it’s cool to watch.