Just Monday, I told you about walking past ground work for the new townhomes of Prairie Court. According to the nine permits issued by the City of Chicago for Prairie Court, the general contractor was to be Richard Builders.

Well, that came as quite a surprise to Summit Design + Build in the West Loop. They were kind enough to send over a few renderings of the new townhomes, as well as to clear up the confusion over the GC duties. Summit Design + Build is, in fact, the general contractor for Prairie Court. Which explains the excitement of the tweet they sent.

Here’s the press release Summit Design + Build sent along with their photos, followed by fresh interior and exterior renderings.

Luxury townhomes to be completed by 2018, bring best of both worlds to Chicago’s next residential boom

A joint venture between Sandz Development Co. and Golub & Co., who bring over 90 years of luxury development experience, will see the addition of 55, four-story luxury townhomes within nine buildings at 18th and Prairie Avenue. Buyers can choose from three and four bedroom units that will range from 2,800 to 4,500 square feet.

“Our team is excited that construction is getting underway at Prairie Court Townhomes, and we are thrilled to work with Sandz [Development] and Golub, two great developers, to bring not only new luxury townhomes, but a new community to the South Loop,” said Adam Miller, President of Summit Design + Build, LLC. “We also look forward to expanding our portfolio in Chicago’s next ‘hot’ neighborhood.”

The site was poised to be the home of the X/O high-rise nearly ten years ago, but the plan, which included 479 condos, was abandoned in 2009 after the developers defaulted on their loan. The Prairie Court Townhomes, which will feature individual attached two-car garages, contemporary upscale finishes, brick veneer and accent limestone facades, private wrought-iron ornamental fenced yards, landscaped building courtyards and private rooftop decks, have already garnered serious interest and enjoyed early sales success by having a scheme that better fits the historic neighborhood. The land was rezoned for residential use of six stories or fewer after its sale in 2011.

The Prairie Avenue District was established over 100 years ago as an escape for the city’s wealthiest and was designated a Chicago landmark in December of 1979. “This project brings the best of both worlds – a piece of secluded Chicago history yet easy access to the city’s nightlife and cultural happenings,” said Miller.

The project will be completed in stages over the course of 30 months based on sales of the townhomes. Chicago real estate brokerage firm @Properties is overseeing the sales at Prairie Court, led by Cyndy Salgado. An onsite sales center, which opened late March, offers potential buyers a glimpse of the Prairie Court lifestyle by taking a three-dimensional virtual tour on a tablet or laptop. Additional information can be found by visiting the Prairie Court website. 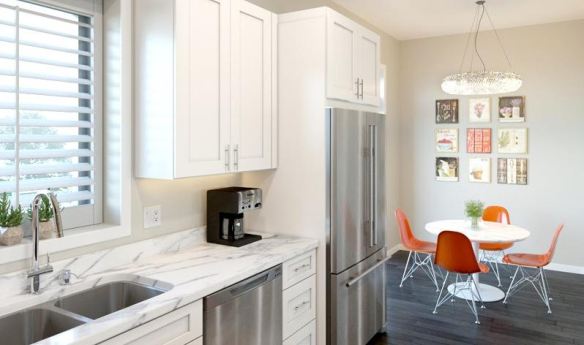 Summit Design + Build even sent a shot from the site. They know me well 🙂