This here blog was the brainchild of literally dozens of minutes of deep thought, wondering what to do with the thousands (yes, I really do have thousands) of construction photos I’ve taken over the past couple of years, plus those I add on an almost-daily basis.

Buying the domain was the easy part. Setting up a Twitter account was the fun part. Penning the first post? Excruciating. What do I start with? I have files of pictures for finished buildings, unfinished buildings, parking lots, vacant lots, buildings under demolition. Do I start with a construction project I’m most obsessed with? That’d be 150 North Riverside. But I’ve done that. More than once. What about something no one else has covered? Those projects don’t exist; there are dozens of us running around Chicago capturing images of every phase of construction at every location imaginable.

So maybe I just I go with something close by, something I can see from the 48th-floor windows of the B.U.C. HQ. (It’s not really an office, it’s an apartment. But don’t ask to come visit without a covered dish and beverages.) Well, I’ve done that too, actually. But I have to pick a horse at some point and get things moving. A couple darts have been thrown, and they landed on “newest” and “closest.” And that can only mean 625 West Adams.

625 West Adams received its foundation permit from the City of Chicago on May 23. The former surface parking lot has been enclosed in fencing, and backhoes have started ripping holes in the pavement. They’re preparing the site for a 20-story office tower designed by Chicago architecture firm Solomon Cordwell Buenz. You know SCB’s work at The Legacy at Millennium Park (a personal favorite) and 500 Lake Shore Drive, among others. They do a lot of work in Hawaii, too. Hawaii’s awesome. Just thought that was worth mentioning.

A rendering from SCB of the B.U.C. office, which also happens to show 625 West Adams. 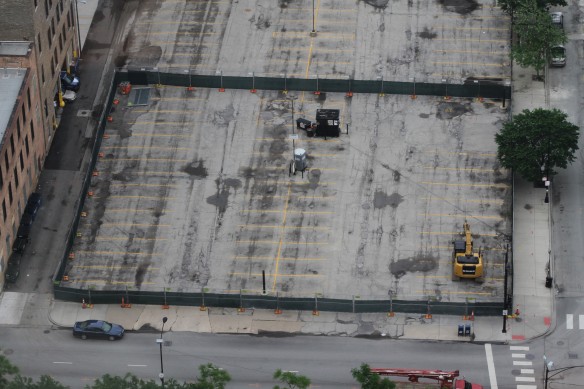 May 28: The north half of the lot is fenced in, and equipment is on scene. 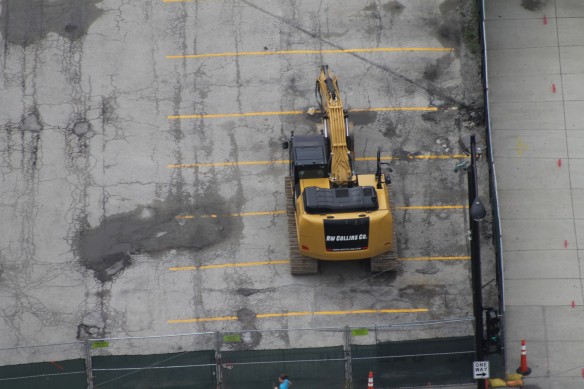 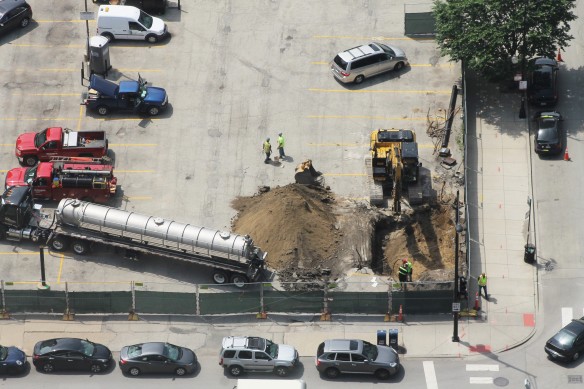 By Saturday, June 4, they’ve got the entire lot fenced off, and holes everywhere.

The foundation permit from the City of Chicago for 625 West Adams.

A rendering of 625 West Adams from SCB.